The City of Lenoir, North Carolina, is centrally located in Caldwell County, 65 miles northwest of Charlotte and 61 miles northeast of Asheville, North Carolina at the foot of the Blue Ridge Mountains. Named after Revolutionary War hero William Lenoir, the City was established by the North Carolina Legislature as the County seat in 1841 and incorporated in 1851. Lenoir has historically been a furniture manufacturing community, especially with the opening of the Chester-Lenoir Railway in 1884. Today, Lenoir's economy is diverse and growing. Furniture manufacturing is still strong, but the City is proud to be the home of Google Data Center, Exela Pharma Sciences, Woodgrain Millwork and the Caldwell University of North Carolina (UNC) Health Care. 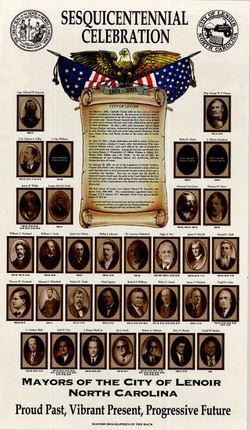 The original settlement of Lenoir was first known as Tucker's Barn. The community of Tucker's Barn, which was settled by a family named Tucker around 1765, was on the north side of Lower Creek.

A Place for Gatherings

The Tucker homestead became a gathering place for many occasions. It was a voting precinct, a muster ground, a store and a place for "frolics" and celebrations. At least one large Fourth of July celebration included a drum corps, a march of Revolutionary veterans and speeches by General William Lenoir. The place was so popular that a piece of music suitable for violins was composed by a musician and entitled "Tucker's Barn". Doc Watson eventually recorded this tune in 1964 on an album titled, "The Watson Family Tradition."

When Caldwell County was formed in 1841, a commission was appointed to lay off a county seat. There was some division over a proper site: One party favored the south side of Lower Creek, the present day Whitnel Area, because of the scenic visibility of the Blue Ridge, but since the bulk of the citizenry lived on the north side of Lower Creek, Tucker's Barn was chosen. The choice was made because of the accessibility of Tucker's Barn in the event of a Spring "freshet". The commission was charged with the responsibility of laying off a 25-acre site for a courthouse and jail  The new county seat was named Lenoir in honor of General William Lenoir, a Revolutionary hero and trustee of the University of North Carolina.

In 1889 the Lenoir Furniture Company was formed. From this first factory, the furniture industry developed into an industry that would supply thousands of jobs to people not only in Lenoir, but also in the western North Carolina region. Lenoir Furniture was followed by Broyhill, Fairfield, Bernhardt and Kincaid Furniture companies.

Buyers from All Around Came to Lenoir to Buy Furniture

Fine-crafted furniture made in Lenoir graced homes in over thirty different countries in the world. The Southern Furniture market brought buyers from all over the United States to Lenoir to get “sneak” previews of the furniture lines that would be on the market. Furniture executives would host market buyers in their homes and lavish parties made Lenoir’s brand of Southern hospitality famous. 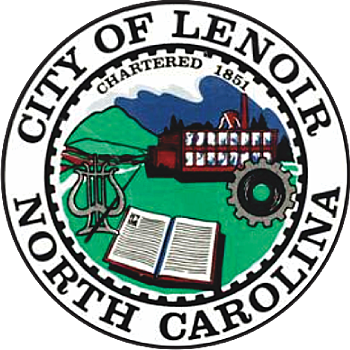 The background consists of a beautiful mountain peak representing Hibriten Mountain, a local landmark. Hibriten Mountain was originally called Turkey Cock Mountain. It's said that Miss Emma Baker, an English teacher who taught at Montrose Academy, changed the name in the early 1800s. Miss Baker may have had Brighton, England, her native county, in mind. Turkey Cock Mountain reminded Miss Baker of a resort in Brighton, England, and thought it should be given a more dignified name, High Brighton Mountain. Eventually the gh in both words was dropped resulting in Hibriten Mountain.

The book represents Lenoir's educational legacy established in 1841 with the naming of Caldwell County in honor of Joseph Caldwell, the first president of the University of North Carolina. It serves as a reminder that education is a cornerstone to individual and community success.

The factory represents Lenoir's furniture making heritage. Throughout it's history, Lenoir has been steeped in furniture and many generations of residents helped craft the premier furniture brands in the country. Lenoir has long been know as a the Furniture Capital of the South.

The lyre represents Lenoir's musical heritage, which is housed in the Harper Library and Museum named for Captain James C. Harper, the original conductor of the Lenoir High School Band. Harper dedicated his life to music and the achievement of excellence resulting in a community concert series, music clubs, and growth of culture in Lenoir. 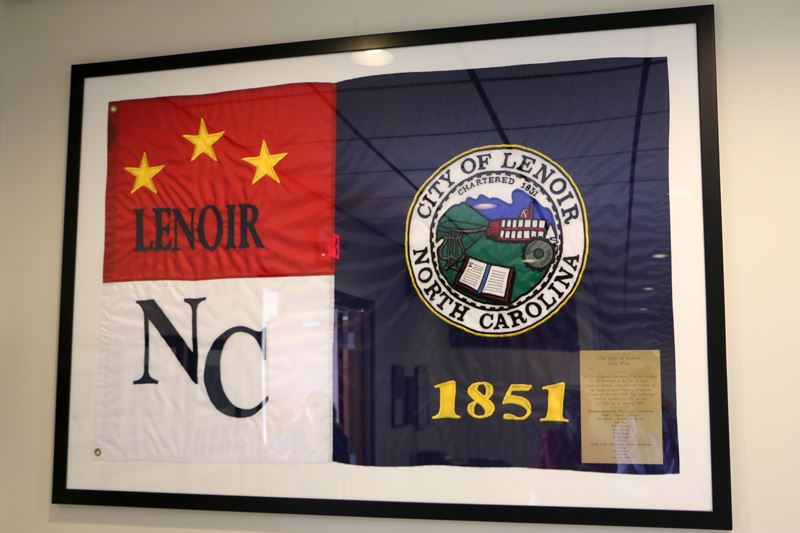 Lenoir's City Flag was created in 2001 as part of the City's Sesquicentennial Celebration. The Anniversary Flag was designed by and presented to the City of Lenoir, County of Caldwell, State of North Carolina by the Sesquicentennial Planning Committee in honor of the city’s 150th Year Celebration from its incorporation in 1851. The flag was presented and dedicated to the City of Lenoir January 25, 2002.

The three stars in the red upper canton represent the theme of the Sesquicentennial Celebration - Our Proud Past, Our Vibrant Present, and Our Progressive Future. The top star in the crown arrangement represents the City of Lenoir being the County Seat of Caldwell County and the gateway between the foothills and the Blue Ridge Mountains.

Payment OptionsPay bills online, set up a bank draft, and more.
JobsCheck out current employment opportunities.
COVID-19 InfoNews and resources about the City and State's COVID-19 response
Garbage CollectionFind out more about local trash pickup.
Aquatic CenterSwim and get fit at the Lenoir Aquatic & Fitness Center.
Parks & RecreationPlay and enjoy the outdoors at our parks and rec centers.
Water ServiceSign up and maintain water and sewer services.
WaterSmartSign up! Check water use. Get alerts.
Contact UsHave a question? Contact the City.
Police DepartmentThe City Police Department is committed to providing quality service 24/7/365.
GreenwayThe greenway offers more than 9 miles of path and trails for outdoor actvities.
Downtown LenoirVisit the Downtown Lenoir website.
Government Websites by CivicPlus®